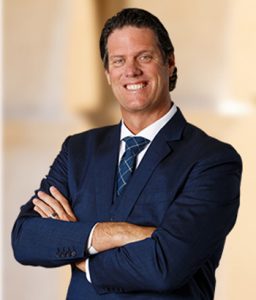 After receiving his Juris Doctorate from the University of the Pacific McGeorge School of Law, passing the Nevada Bar in 2005, and getting hired by the Richard Harris Law Firm, David Boehrer could not erase the impact of the following case: “When I first began practicing law, I handled a wrongful death case in Pahrump where a girl was killed by a fire truck that was not using sirens or lights while running a red light. Due to the current law, the city was only responsible for a minimal amount. The loss of a young girl could have been avoided if the fire truck would have followed proper procedure. I felt it was unfair to let the city off so easily. Since then I have been motivated to get this changed and at the same time to help my clients in any way possible.”

Perhaps that significant memory explains why David’s favorite quote is “And the world spins madly on”. The outcome of this case has fueled his lifelong desire to be a great lawyer. During law school, David served as a clerk for two years with the Law Office of Frank D. Penney, a Sacramento personal injury firm where he focused his attention on the litigation portion of the practice. He was the recipient of a scholarship at California State University Sacramento, where he received his undergraduate degree, and another scholarship at McGeorge School of Law. David has handled many different types of cases in his career as an injury attorney, ranging from slip and falls to major motor vehicle and big rig accidents.

Even though David would argue that most cases are settled out of court, his goal is to work the case towards trial to get the best result. David’s practice of law focuses on automobile accidents, motorcycle accidents, premises liability, wrongful death, and product liability. David is a member of the Nevada Justice Association (NJA). The largest Trial Lawyers Association in Nevada. David is currently on the Executive committee of the NJA and is the president-elect. He was the president from October 2020 through October 2021. As a member, he founded and Co-Chaired NJA’s Club X, a club for lawyers with less than ten years of experience. They would organize and attend Continuing Legal Education (CLE) seminars and help to organize different social events for the group. David also serves on NJA’s Convention Committee and works to assure the convention provides a variety of CLE, social, and recreational opportunities for all NJA members. David devotes a substantial amount of time to helping people.

When he is not working, David takes pleasure in volunteering as the Football Booster Club President at Foothill High School and spending quality time with his wife and kids. Whether they are taking their Polaris RZRs out to the sand dunes or up to the mountains, or they are wake surfing on the lake or swimming in the ocean, all of David’s extra time is spent enjoying life with his family.